A brand that has been at the heart of Donegal knitwear for over 100 years, Kennedy of Ardara stock the best in both traditional and contemporary Irish knitwear for men, women and children, all of which are available for purchase through their online store.

Update 2018
The shop in Ardara is now closed but you can shop online at www.etsy.com/ie/shop/KennedyIrishSweaters

Recommended by Lonely Planet, Frommers, Fodors and The Rough Guide, the famous retail and manufacturing business has been located in the centre of the scenic heritage town of Ardara (awarded The Irish Times ‘Best Village To Live In Ireland 2012′) for four generations. Renowned for its Aran hand-knits and the famous Hillwalker outdoor sweater, the company was previously awarded the honour of ‘Irish Exporter of the Year’. 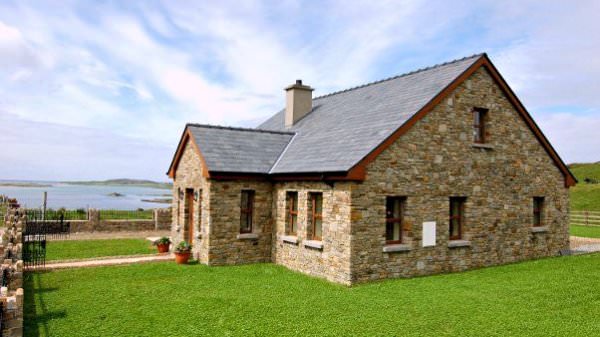 An Teach Braini is a luxury modern holiday home with a truly stunning setting close to the shores of Loughros Beg Bay 3 km outside the Heritage Town of Ardara.

The cottage lies approximately two miles south west of Ardara, off the road to Glencolumkille and Carrick. It is situated on the lower slopes of a spur that rises to form a peak known as Crocknapeast.

C Kennedy & Sons, trading as Kennedy of Ardara was established in 1902, when Connell (Con) Kennedy, one of five Ardara brothers who emigrated to the USA in the early 1880s, made what was then a rare journey back to his homeland, after twenty years running saloons in the wild west mining towns of Gallup, New Mexico, and Winslow, Arizona…. click below to read more

History of Kennedy of Ardara

C Kennedy & Sons, (trading as Kennedy of Ardara) was established in 1902, after Con Kennedy, one of five Ardara brothers who emigrated to the USA in the early 1880s, made what was then an extremely rare journey back to his homeland on holiday, after twenty years running saloons in the wild west mining towns of Gallup, New Mexico, and Winslow, Arizona.

Rather than return to the USA after his holiday, Con stayed on in his home village after he met local woman, Etta, a renowned milliner, seamstress and dress maker. As he had drapery experience, the two made a perfect partnership and set up a general drapery store, soon after their marriage, in what would become the Kennedy family home for more than a century.

In the early years, apart from managing the drapery business, Con and Etta focused on getting hand-embroidery or “sprigging” as it was known locally made in the cottage homes of Donegal for export to a market he was familiar with, the USA. The business also dealt in handwoven tweeds, which in those days was also very much a cottage industry.

The embroidery or sprigging trade flourished until the mid-1930s when a slump occurred in the linen trade. When a further slump came, at the end of World War II, this time in the sale of tweeds, the business was in the hands of their son Mick and his wife Margaret, a former domestic science teacher, decided to shift their concentration to the hand-knit industry, which had a long history in Donegal.

To grow the hand-knitting industry, the couple set about recruiting cottage workers, to ensure a steady flow of hand-knits, sourcing knitters from all over Donegal and beyond to turn out fashioned hand-knit garments for sale in the home and export markets.

By the mid-1950s, a sizeable knitwear export business was in operation supplying boutiques and department stores across the USA, Canada, South Africa, Australia, New Zealand and many European countries. Among the big name clients were stores like Macys and Bloomingdales, as well as Altmans in New York, Neiman Marcus in Dallas, and Trimingham’s in Bermuda.

By 1960, the company were employing 800 hand-knitters, and in 1961 were awarded the prestigious honour of ‘Exporter of the Year’ by the Chambers of Commerce of Ireland. Mick and Margaret attended an official banquet in Wexford to collect the award, which they received ahead of that year’s runners-up; the now world famous Waterford Glass. After winning the award, Ireland’s national broadcaster, RTE came to Ardara to film an item on the company.

The blooming Irish tourism industry and the strength of the Kennedy of Ardara name led to tourists starting to flock to Ardara in the 1960s to secure quality hand-knits.

The growth in demand for Donegal hand-knits, led to a purpose built factory and shop opening in 1968, in the business’s current location across the street from the old family home.

By 1980, the company were employing 2,000 hand-knitters across the length of Donegal, from Bundoran to Fanad Head.

The globalisation of the 1990’s saw an increase in competition from international manufacturers, Kennedy of Ardara continued to produce new designs every year in hand-knits, loomed garments and accessories.

One hundred and ten years after first opening its doors, Kennedy of Ardara remains in business, still producing quality knitwear for sale through its factory shop and supplying throughout the world. Click on the links below to find out more about the company.

rin Blue Flag Beach is located close to the town of Glenties on the western coast of Donegal. This fine sandy beach is over two kilometres long.

Country Markets in Donegal are indoor that generally operate one day a week to market the shareholders’ fresh farm, garden and home produce and handcrafts

The Cup of Tae Festival takes place annually in the Heritage Town of Ardara on the May Bank Holiday Weekend. It is one of the best and most popular traditional music festivals in the north west of Ireland. The festival features the top class musicians in traditional...
Read More

Sheskinmore Nature Reserve is a large area of sand dunes, lake and marsh that lies between Kiltooris and Ballinreavy Strand, north west of Ardara, Co. Donegal.

Glencolmcille Folk Village is a reconstruction of the historic homes and dwellings of the Glencolmcille area in South West Donegal that gives a glimpse of life and living conditions of local people over several centuries.

Port is an abandoned “Famine Village” located on the coast about 14 km north west of Glencolmcille in Co Donegal. It is also referred to as a “Ghost Village” or “The Deserted Village” – a reference to the fact that a whole hamlet of houses just seems to have been abandoned to the elements.