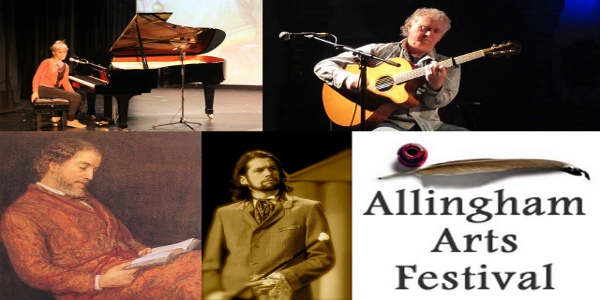 On its re-launch in 2011 by the Allingham Arts Association the festival has been put on a stronger footing with a broader perspective on the arts being adopted by the festival including fine art, music and performing arts, culinary arts etc. Contributors such as Catherine Dunne, Dermot Healy and Charlie Mc Gettigan, were part of the line up of the revived festival in 2011. In addition a mixture of competitions, music, talks, readings, workshops and children’s entertainment were features of a very successful event.

A Festival for all the family

The Allingham Arts Festival now encompasses a broad range of events with activities for people of all ages and interests.

William Allingham
The name Allingham resonates through the centuries in Ballyshannon. Although no member of the Allingham family remain in the town, the association with William the poet is a constant reminder of the towns creative hertitage. William was born on the Mall on the 19th of March 1824 in a house which still bears a plaque to his memory. Allingham’s poetry in the words of the late Jim Keane,”reflect a gentle and sensitive man who sympathised with the plight of the native population even though his family were well to do business people”

Self Catering in the Ballyshannon Area